Ruah has been a leading voice for change for more than 60 years.

The service was founded in 1959. It was the year Perth’s iconic Narrows Bridge opened and our then sleepy city teetered on the brink of an iron ore boom. Along with the benefits of wealth and growth, came a new wave of homeless and destitute people who flocked to the city in search of help.

Use the arrow keys on your keyboard for quick navigation 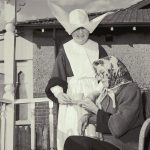 Four brave women, driven by their religious faith, arrived in Western Australia to work with the poor in Northbridge. They were known as the “aeroplane nuns” because of their elaborate white headgear, and belonged to the Daughters of Charity, a Catholic order of nuns established by St Vincent de Paul who worked with poor people on the streets of Europe 300 years ago.

The Daughters of Charity were resilient and resourceful, setting up Perth’s first soup kitchen, first women’s shelter and first Aboriginal women’s refuge. They saw a need and were driven to provide practical help for the most vulnerable and disadvantaged people around them. At the time, social services were in their infancy and government funding was almost non-existent.

By the 1990s, the foundation of Ruah as a modern, professional organisation was taking shape. The Sisters established a public company – Daughters of Charity Services WA Ltd – and began handing over their operations to a lay management team.

Professional staff were employed to develop an integrated therapeutic model to tackle the complex problems of people in need and their families. Capacity-building projects were initiated, from recreation to support for the children of parents with mental illness, and research was conducted to evaluate and inform professional practice.

A partnership with the Derbarl Yerrigan Health Service was set up to provide mental health support for Aboriginal people, and collaborations with government health and other agencies pioneered a raft of community-based mental health and wellness programs.

In 2009, after 50 years in Perth, the Daughters of Charity officially relinquished control of the not-for-profit company and the organisation changed its name to Ruah Community Services. This severed formal ties with the Catholic Church and completed our transition an independent entity.

The De Paul Centre, which started out as the original soup kitchen, was renamed the Ruah Centre. It launched a progressive new model to fill emerging gaps in services for people experiencing homelessness including a new generation of young people struggling with drug addiction.

The long-established women’s refuge at Ave Maria House, now Harmony Place, was brought under the new corporate umbrella, along with Anawim, the first shelter for Aboriginal women in WA, now Kambarang Place.

Building on our legacy

Today, Ruah is an independent, not-for-profit organisation lead by a prominent Board and Executive. We are moving forward with open hearts and bold strides … but we never lose sight of the pioneering and courageous work our founders began. Social, economic, political and cultural circumstances change, but what has lived on from decade-to-decade is our drive to make a difference for people who are vulnerable, disadvantaged and discriminated against.

Find out how you can help too!

We’ll send occasional (but not too many) updates to you via email.